Vancouver, British Columbia, April 24, 2019 (TSX Venture: EMX; NYSE American: EMX) – EMX Royalty Corporation (“EMX” or the “Company”) is pleased to announce that it will make a $1.0 million (all dollar amounts in CDN) strategic equity investment in Millrock Resources Inc. (“Millrock”) (TSX Venture: MRO, OTCQX: MLRKF) through a private placement financing (the “Private Placement”). In return, Millrock will grant certain royalty interests to EMX on some of Millrock’s properties in the Goodpaster Mining District, Alaska. EMX and Millrock have agreed that the Private Placement funds are to be used to support Millrock’s programs in the Goodpaster District, which hosts the Pogo high grade underground gold mine. The Pogo Mine, now operated by Northern Star Resources Limited (“Northern Star”), has produced 3.8 million ounces of gold since startup in 20061.

Millrock has advised EMX that it has staked a large, contiguous block of claims adjacent to Northern Star’s Pogo Mine property that are subject to EMX’s new royalty interests2. The claims include prospects east of the Pogo Mine (the East Pogo project) and add to Millrock’s existing land position west of the Pogo Gold Mine (the West Pogo project). The combined East and West Pogo projects cover over 40 kilometers along the Pogo Trend of gold deposits and occurrences. Additionally, Millrock advises that it has staked claims, also subject to EMX’s new royalty interests, covering a ~30 kilometer strike extent along the “Shaw-Eagle-LMS Trend” of gold prospects and geochemical anomalies. EMX’s Goodpaster royalty properties are particularly compelling given Northern Star’s recent successes in drilling its nearby Goodpaster prospect and developing the Central Lodes discovery. Please see the attached map.

The Private Placement includes an accelerated warrant expiry provision whereby Millrock can notify EMX that the warrants will expire if not exercised within 30 days after receipt of notice that Millrock’s shares have traded at or above $0.20 per share for 20 consecutive trading days. The Private Placement also includes a partial restriction on resale of the securities (in addition to the usual four month hold provision) until the first anniversary of the investment, and an anti-dilution clause entitling EMX to subscribe for additional shares in any future financings to maintain its existing percentage ownership of Millrock.

Of the gross proceeds to be raised from the Private Placement, Millrock will use a minimum of $500,000 to acquire mineral rights and advance exploration on projects within a defined area of interest surrounding the Goodpaster Mining District. Millrock will grant royalty rights to EMX on new projects acquired with the Private Placement funding. The amount of the royalty granted to EMX for new claims where no underlying royalty exists, will be 1.0% of Net Smelter Returns (“NSR”). For claims staked on lands where there is an existing royalty payable to a third party, the royalty granted to EMX will be a 0.5% NSR. The obligation to grant royalties on new projects will end when Millrock has expended $500,000 on claim staking and exploration within the defined area of interest.

Additionally, a 1% NSR royalty will be granted to EMX for some existing West Pogo project claims held by Millrock.

Finally, if EMX provides funding to Millrock to buyout royalties on the Hansen and Aurora claim blocks (optioned to Millrock), Millrock will grant a new royalty of 1.5% NSR to EMX on such claims. Millrock will also grant EMX the right of first refusal on any future royalty financings.

The closing of the Private Placement is contingent on Millrock receiving approval from the TSX Venture Exchange.

Overview of EMX’s Goodpaster Royalties. EMX’s Goodpaster royalty interests will principally result from Millrock’s geologic expertise in the district and a substantial proprietary database of historic drilling, geochemistry, and geophysics that has been key in identifying priority targets for staking claims along the Pogo and Shaw-Eagle-LMS Trends. New claims totaling ~49,300 hectares will be covered by 0.5% to 1% NSR EMX royalty interests. Existing Millrock claims totaling 2,710 hectares will be covered by 1% NSR EMX royalty interests. In addition, EMX has the option to fund a buyout of the underlying 1.5% NSR royalties on each of the Hansen and Aurora claim blocks that total 1,860 hectares.

About EMX. EMX is a precious and base metals royalty company. EMX’s investors are provided with discovery, development, and commodity price optionality, while limiting exposure to the risks inherent to operating companies. The Company’s common shares are listed on the TSX Venture Exchange and the NYSE American Exchange under the symbol EMX. Please see www.EMXroyalty.com for more information.

Mr. Michael P. Sheehan, CPG, a Qualified Person as defined by National Instrument 43-101 Standards of Disclosure for Mineral Projects of the Canadian Securities Administrators and employee of the Company, has reviewed, verified and approved the disclosure of the technical information contained in this news release.

Forward-Looking Statements
This news release may contain “forward looking statements” that reflect the Company’s current expectations and projections about its future results. These forward-looking statements may include statements regarding perceived merits of properties, exploration results and budgets, mineral reserves and resource estimates, work programs, capital expenditures, timelines, strategic plans, market prices for precious and base metal, or other statements that are not statements of fact. When used in this news release, words such as “estimate,” “intend,” “expect,” “anticipate,” “will”, “believe”, “potential” and similar expressions are intended to identify forward-looking statements, which, by their very nature, are not guarantees of the Company’s future operational or financial performance, and are subject to risks and uncertainties and other factors that could cause the Company’s actual results, performance, prospects or opportunities to differ materially from those expressed in, or implied by, these forward-looking statements. These risks, uncertainties and factors may include, but are not limited to: unavailability of financing, failure to identify commercially viable mineral reserves, fluctuations in the market valuation for commodities, difficulties in obtaining required approvals for the development of a mineral project, difficulties in obtaining required regulatory approvals, increased regulatory compliance costs, expectations of project funding by joint venture partners and other factors.

Readers are cautioned not to place undue reliance on these forward-looking statements, which speak only as of the date of this news release or as of the date otherwise specifically indicated herein. Due to risks and uncertainties, including the risks and uncertainties identified in this news release, and other risk factors and forward-looking statements listed in the Company’s MD&A for the year that ended on December 31, 2018 (the “MD&A”), and the most recently filed Form 20-F for the year that ended on December 31, 2018, actual events may differ materially from current expectations. More information about the Company, including the MD&A, the 20-F and financial statements of the Company, is available on SEDAR at www.sedar.com and on the SEC’s EDGAR website at www.sec.gov. 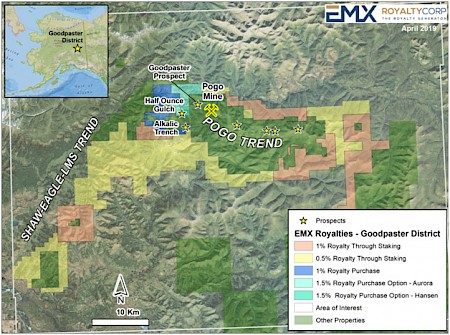 2 The Pogo mine provides context for EMX’s royalty properties, which occur in a similar geologic setting. However, this is not necessarily indicative that these properties host similar tonnages and grades of mineralization.