The Løkken District produced copper from VMS-style deposits from its discovery in 1654 through 1987 and was the largest copper producer in Norway’s history1. The Kjøli project is located along the trend of VMS deposits that make up the Røros-Tynset-Folldal belt of VMS deposits in central Norway, a belt that saw production for over 300 years (similar to Løkken), commencing in the mid-1600’s. Both are part of a broader geologic terrane that was originally linked geologically to the VMS districts in Newfoundland-New Brunswick-Maine and the Appalachian Mountains of North America. This broader, tectonically reconstructed terrane constitutes one of the most prolific VMS belts in the world.

The Southern Gold Line properties form a group of licenses in the vicinity of and around Dragon Mining Ltd’s Fäboliden gold development project in central Sweden2. This portfolio of gold licenses represents a continuation of EMX’s work along the “Gold Line” in central Sweden, a geologic trend that contains numerous precious metal occurrences, deposits, mines and exploration projects.

The Agreement with NDR represents another example of the execution of EMX’s royalty generation aspect of its business model, whereby the Projects were acquired by EMX during regional reconnaissance work from 2017-2019, advanced using EMX’s in-country technical team, and are now partnered with NDR. EMX will receive cash, equity in NDR, and royalty interests in the Projects. EMX looks forward to working closely with NDR to further advance the Projects.

See Figure 1 for a location map and www.EMXroyalty.com for further information on the Projects.

Commercial Terms Overview. Pursuant to the Agreement, NDR can earn 100% interest in the Projects by the issuance of shares to EMX and performance of work during a one-year option period, as described below (all dollar amounts in USD unless otherwise noted):

Upon exercise of the option, NDR will issue to EMX that number of common shares of NDR that will increase EMX’s equity ownership in NDR to 9.9%, the projects will be transferred to NDR, and EMX will receive a 2.5% NSR royalty on the properties comprising the Projects. Within six years of the execution of the agreement, NDR may purchase 0.5% of the NSR royalty, leaving EMX with a 2.0% NSR royalty. EMX will also receive annual advance royalty (“AAR”) payments of $25,000 per project commencing on the second anniversary of the agreement, with the AAR payments increasing by $5,000 per year until reaching $75,000 per year per project.

After the exercise of the option, further conditions include:

The issuance of NDR shares to EMX as set forth in the Agreement is subject to receipt of TSX Venture Exchange approval.

Overview of the Projects. All three Projects subject to the Agreement were directly acquired by EMX and have no underlying interests. Brief descriptions of the Projects are given below.

Løkken Project, Norway.The Løkken project is comprised of 21,000 hectares of exploration permits that surround the historic Løkken mine. Løkken was the largest ophiolite-hosted Cypress-type VMS deposit to be developed in the world. Production at Løkken commenced in 1654 and continued until closure in 1987, producing 24 million tonnes averaging 2.3% copper and 1.8% zinc, with multiple satellite bodies of mineralization that also saw varying degrees of development3. Several zones of historic drill defined mineralization remain undeveloped in the district, where clear evidence is seen for mineralization developed in multiple stratigraphic horizons and along strike of the major deposits. Historic data sets also include extensive geophysical surveys, with multiple untested anomalies providing immediate upside exploration potential.

Kjøli Project, Norway. Like the Løkken District, the 12,000 hectare Kjøli Project represents an extensive trend of VMS-type occurrences and historic mines. Kjøli is positioned along the northern extension of the belt of VMS deposits in Norway that comprise the greater Røros district, which has seen mining for over 300 years, beginning in the mid-1600’s. The Kjøli project contains the Killingdal mine, which operated from 1677-1986, and produced 2.96 million tonnes averaging 1.7% copper, 5.5% zinc, and 0.4% lead4. Recent airborne geophysical surveys identified numerous exploration targets on the Kjøli project that have not yet been followed up.

Southern Gold Line, Sweden.EMX is continuing its work along the Gold Line trend in central Sweden, acquiring six prospective licenses in the vicinity of and along trend of Dragon Mining Ltd’s Fäboliden development project. The Southern Gold Line licenses comprise over 50,000 hectares and cover areas with similar geologic and structural settings as the Fäboliden deposit. The Company’s reconnaissance sampling and mapping programs are ongoing in the area, with initial BLEG samples collected across portions of the licenses showing multiple areas with enrichments of gold in stream sediments.

About EMX. EMX is a precious and base metals royalty company. EMX’s investors are provided with discovery, development, and commodity price optionality, while limiting exposure to risks inherent to operating companies. The Company’s common shares are listed on the NYSE American Exchange and the TSX Venture Exchange under the symbol EMX. Please see www.EMXroyalty.com for more information.

Forward-Looking Statements
This news release may contain “forward looking statements” that reflect the Company’s current expectations and projections about its future results. These forward-looking statements may include statements regarding perceived merit of properties, exploration results and budgets, mineral reserves and resource estimates, work programs, capital expenditures, timelines, strategic plans, market prices for precious and base metal, or other statements that are not statements of fact. When used in this news release, words such as “estimate,” “intend,” “expect,” “anticipate,” “will”, “believe”, “potential”  and similar expressions are intended to identify forward-looking statements, which, by their very nature, are not guarantees of the Company’s future operational or financial performance, and are subject to risks and uncertainties and other factors that could cause the Company’s actual results, performance, prospects or opportunities to differ materially from those expressed in, or implied by, these forward-looking statements. These risks, uncertainties and factors may include, but are not limited to: unavailability of financing, failure to identify commercially viable mineral reserves, fluctuations in the market valuation for commodities, difficulties in obtaining required approvals for the development of a mineral project, increased regulatory compliance costs, expectations of project funding by joint venture partners and other factors.

Readers are cautioned not to place undue reliance on these forward-looking statements, which speak only as of the date of this news release or as of the date otherwise specifically indicated herein.  Due to risks and uncertainties, including the risks and uncertainties identified in this news release, and other risk factors and forward-looking statements listed in the Company’s MD&A for the quarter ended March 31, 2020 (the “MD&A”), and the most recently filed Annual Information Form (“AIF”)  for the year ended December 31, 2019, actual events may differ materially from current expectations.  More information about the Company, including the MD&A, the AIF and financial statements of the Company, is available on SEDAR at www.sedar.com and on the SEC’s EDGAR website at www.sec.gov. 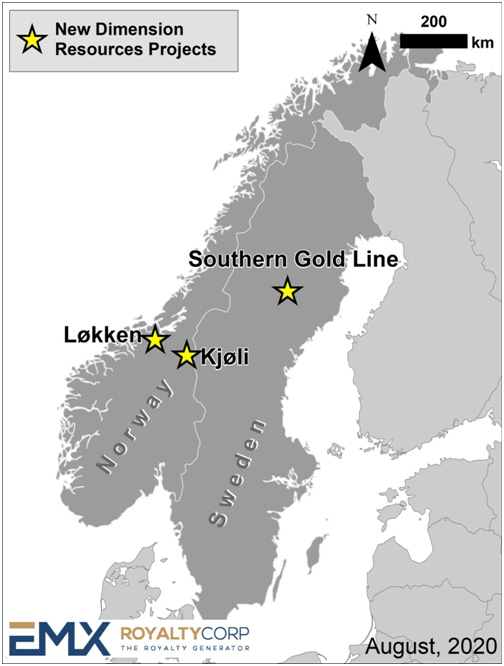 2 References made to nearby mines and analogous deposits provide geologic context for EMX’s Projects, but are not necessarily indicative that EMX’s Projects host similar mineralization.