The nickel-copper Projects are located in northeastern Sweden in the Fennoscandian Shield (see Figure 1), which is host to numerous nickel deposits in Sweden, Finland and western Russia. The Projects each contain drill-defined zones of nickel-copper sulfide mineralization developed in and around mafic to ultramafic intrusions (magmatic sulfide-style mineralization). These zones of mineralization are also variably enriched in cobalt and platinum-group-elements (PGE), key metals used in current battery technologies. Most of the Projects’ occurrences and deposits were discovered in the 1970’s and 1980’s, with only limited and incomplete histories of follow-up exploration. See www.EMXroyalty.com for further information.

The Agreement with Swedish Nickel/Bayrock represents another example of EMX’s execution of the royalty generation aspect of its business model. EMX began exploration programs for nickel-copper-cobalt-PGE deposits in the Nordic countries in 2016, at a time of lower battery metal prices and when there was little commercial interest in these types of projects. Improvements in the battery metals markets in recent years have led to a resurgence in interest in battery metals projects, especially in stable political jurisdictions such as the Nordic countries.

Commercial Terms Overview. In accordance with the Agreement, Swedish Nickel can acquire 100% interests in any or all of the Projects through the issuance of cash or shares to EMX and performance of work on individual projects during a 36 month (3 year) option period, subject to the following terms (all dollar amounts in AUD):

After satisfying the work commitments and exercising the option on any or all of the Projects, Swedish Nickel will grant EMX royalty interests with annual advance royalty (“AAR”) payments and other considerations on each of the Projects for which an option is exercised:

Overview of the Projects. The Projects are situated within a belt of mafic-ultramafic intrusive complexes that straddle the Sweden-Finland border. This belt of intrusions is host to multiple nickel-sulfide deposits such as the Kevitsa and Sakatti deposits in Finland. Each of the EMX Projects included in the Agreement contain historical drill defined zones of nickel copper mineralization that also show variable enrichments in cobalt and PGE.

Kukasjarvi Project. Kukasjarvi has a geologic setting typical of many magmatic sulfide deposits, where sill-like mafic to ultramafic rocks have intruded graphitic and sulfide bearing sedimentary rocks. Magmatic sulfides at Kukasjarvi were discovered by Boliden AB in the 1970’s while tracing mineralized boulders found in the area. Twelve historical diamond holes were drilled for a total of 2,400 meters, and a historical mineral resource for Kukasjarvi was defined[1]. The deposit is believed to be hosted within a metamorphosed ultramafic cumulate rock related to larger volumes of mafic gabbros mapped in the area. The deposit remains poorly delineated (i.e. incompletely drilled), and high Cu:Ni ratios suggest that the currently defined mineralization is distal in the system(s).

Notträsk Project. Notträsk is a layered mafic intrusion of gabbro-norite-peridotite with nickel copper mineralization that was discovered in the 1970’s when road construction exposed an 80 meter thick section of sulfide rich breccias and massive sulfide accumulations. The sulfide mineralization occurs near the base of the intrusive complex, but subsequent exploration programs focussed on mineralization at higher levels within the intrusive complex. Only a few of the historical holes penetrated the basal contact, which represents the primary exploration target and remains largely untested. EMX also sees considerable exploration upside in the apophyses and offshoots of the main intrusive complex which could contain “conduit” type sulfide targets.

Vuostok Project. The Vuostok project is the westernmost of the Projects, located in the Skelleftea mining region of Sweden. Nickel-copper mineralization at Vuostok was discovered in the 1940’s after prospectors followed a trail of mineralized boulders that were carried by glaciers up to 55 kilometers to the southeast[2]. Mineralization at Vuostok mainly occurs along the basal contact of a gabbro sill intruded into granitic country rocks. After discovery, several campaigns of drilling delineated shallow bodies of nickel-copper sulfide mineralization. Many step-out drill holes also intersected masses of nickel-rich sulfide mineralization which appears to be widespread in the gabbroic intrusive complexes. Multiple conductive geophysical anomalies remain untested.

Fiskelträsk Project. Similar to Kukasjarvi, Fiskelträsk is a gabrroic to gabbronorite intrusion emplaced into sulfide-bearing sedimentary rocks. The Fiskelträsk deposit was discovered by Boliden AB during the 1970’s, which drilled eleven holes for a total of 1,600 meters. The drill data were utilized by Wiking Minerals AB to estimate a historical resource in 2014 that has been cited in multiple publications on nickel-copper deposits in the region. The mineralization at Fiskelträsk is enriched in cobalt, and although not analyzed during the 1970’s exploration programs, subsequent studies showed anomalous PGE values which need follow-up work.

Skogträsk Project. Nickel-copper mineralization at Skogträsk was identified and drilled by the Swedish Geological Survey (“SGU”) in 1969-1973. Eleven shallow diamond drill holes by the SGU intersected disseminated and “net-textured” styles of sulfide mineralization at the basal contact of a gabbro-norite-pyroxenite-peridotite intrusion. As was the case at Kukasjarvi and Fiskelträsk, the mafic-ultramafic intrusions at Skogträsk were emplaced into graphitic and sulfide-rich sediments. In 2014 Boss Resources Ltd. conducted electromagnetic geophysical surveys at Skogträsk and drilled two holes totalling 491 meters. One of the holes intersected a significant thickness (~20 meters) of nickel-copper-bearing sulfide mineralization at the basal contact of the intrusive complex, and electromagnetic geophysical data show that the mineralization may extend for several hundred meters along strike. There was no follow-up to the 2014 drill program and multiple geophysical anomalies remain untested on the property.

The nearby mines and deposits discussed in this news release provide context for EMX’s Projects, which occur in similar geologic settings, but this is not necessarily indicative that the Projects host similar tonnages or grades of mineralization.

About EMX. EMX is a precious, base and battery metals royalty company. EMX’s investors are provided with discovery, development, and commodity price optionality, while limiting exposure to risks inherent to operating companies. The Company’s common shares are listed on the NYSE American Exchange and TSX Venture Exchange under the symbol “EMX”; and on the Frankfurt exchange under the symbol “6E9”. Please see www.EMXroyalty.com for more information.

This news release may contain “forward looking statements” that reflect the Company’s current expectations and projections about its future results. These forward-looking statements may include statements regarding perceived merit of properties, exploration results and budgets, mineral reserves and resource estimates, work programs, capital expenditures, timelines, strategic plans, market prices for precious and base metal, or other statements that are not statements of fact. When used in this news release, words such as “estimate,” “intend,” “expect,” “anticipate,” “will”, “believe”, “potential”, “upside” and similar expressions are intended to identify forward-looking statements, which, by their very nature, are not guarantees of the Company’s future operational or financial performance, and are subject to risks and uncertainties and other factors that could cause the Company’s actual results, performance, prospects or opportunities to differ materially from those expressed in, or implied by, these forward-looking statements. These risks, uncertainties and factors may include, but are not limited to: unavailability of financing, failure to identify commercially viable mineral reserves, fluctuations in the market valuation for commodities, difficulties in obtaining required approvals for the development of a mineral project, increased regulatory compliance costs, expectations of project funding by joint venture partners and other factors.

Readers are cautioned not to place undue reliance on these forward-looking statements, which speak only as of the date of this news release or as of the date otherwise specifically indicated herein.  Due to risks and uncertainties, including the risks and uncertainties identified in this news release, and other risk factors and forward-looking statements listed in the Company’s MD&A for the year ended June 30, 2021 (the “MD&A”), and the most recently filed Annual Information Form (the “AIF”) for the year ended December 31, 2020, actual events may differ materially from current expectations.  More information about the Company, including the MD&A, the AIF and financial statements of the Company, is available on SEDAR at www.sedar.com and on the SEC’s EDGAR website at www.sec.gov.

Figure 1. Location map for the Projects and Prospective Mineral Belts. 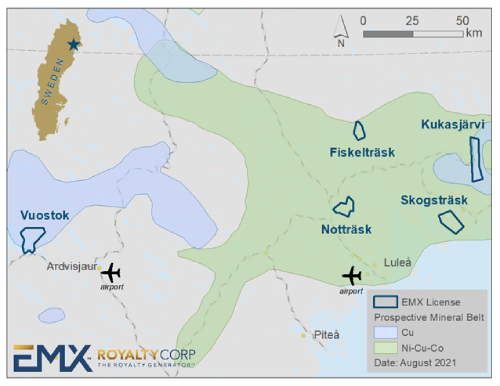