Vancouver, British Columbia, April 26, 2021 (NYSE American: EMX; TSX Venture: EMX; Frankfurt: 6E9) – EMX Royalty Corporation (the “Company” or “EMX”) is pleased to provide an update on its expanding portfolio of royalty generation gold assets in Australia. EMX retains NSR royalties on the Koonenberry project in New South Wales and the Queensland Gold project in southern Queensland, both of which are being advanced by private Australian companies. EMX has also maintained an active generative program, and recently acquired two projects with historical gold resources that have not had follow-up exploration for several decades. The new projects, Yarrol and Mt Steadman, are Intrusion Related Gold Systems (“IRGS”) located along major structural trends in Queensland (see Figure 1). These projects, last explored between 1994-2006 using what are now outdated methods and geologic models, are both available for partnership.

Yarrol was the site of historical mining activities from the 1800’s through the 1930’s, with gold production averaging ~10 g/t 1. Further exploration and assessments conducted in the 1980’s and 1990’s led to the definition of two historical gold resources 2, which EMX is working to update to meet the current requirements of international mineral resource reporting codes. The diamond and reverse circulation drilling conducted in the 1980’s and 1990’s (as originally reported and now archived by the Queensland Geological Survey) intersected shallow gold mineralization over significant thicknesses, including 81 meters averaging 1.34 g/t gold in DDH YARD43, and 43 meters averaging 1.5 g/t gold in DDH YARC-22 3 (true widths unknown) (see Figure 2).

Gold mineralization at Yarrol has several geological expressions, including IRGS-type vein swarms developed in and around Permian-aged dioritic intrusions, as well as sediment-hosted gold mineralization. Elsewhere on the property, mineralization appears to be developed along cross structures that intersect the regional structural trends.

EMX acquired the project after recognizing the upside potential that exists along the 10-15 kilometer trend of gold mineralization that has been historically under-explored. EMX re-processed the historical geophysical data from the project area, which has highlighted additional targets along strike of, and below, the historically defined zones of mineralization. These targets are being readied for drill testing.

Mt Steadman Project. The 5,700 hectare Mt Steadman project is another IRGS-type system located along the Perry

Fault regional-scale structure in southern Queensland (refer to Figure 1b). Mt Steadman’s historical gold production dates from the 1880’s onward from the Chowey Goldfields and along the trend of the Perry Fault at the Venus, London and Steadman mines (see Figures 3 and 3b).

In the 1990’s, an historical gold resource was reported from the vicinity of the Fitzroy prospect in the Chowey Goldfields 4. EMX is working to update the Mt Steadman historical resource to meet the current requirements of international reporting codes for mineral resources. Examples of historical reverse circulation drill intercepts at Mt Steadman’s Fitzroy prospect include 23 meters averaging 1.04 g/t gold in RC95MS7, 24 meters averaging 1.13 g/t gold in RC85MS10, and 21 meters averaging 1.15 g/t gold in RC95MS11 5 (true widths unknown) (see Figure 4). The zones of drill defined mineralization at Fitzroy are shallow (generally less than 60 meters from surface) and remain open in multiple directions.

Gold mineralization at the Fitzroy prospect is developed in the near surface environment as sheeted quartz veins hosted within a granitic intrusion and is associated with broad zones of sericitic alteration. Similar styles of gold mineralization, alteration and geologic occurrences are developed in numerous locations elsewhere along the trace of the Perry Fault on the property. Several of these peripheral target areas have never been drill tested.

EMX recognized Mt Steadman’s upside potential based upon a history of limited exploration along a considerable strike length of the prospective Perry Fault system.

Koonenberry Royalty Property. The 135,000 hectare Koonenberry gold project is positioned along the regional-scale Koonenberry fault zone in southern Australia (see Figure 5), where notable amounts of eluvial/alluvial gold have been recovered in recent years by surface prospectors. The Koonenberry fault represents a major terrane boundary and deep-seated structural zone that was active during several orogenic events, and has multiple splays that project into, and through the project area. This major tectonic break extends northward to Koonenberry from the Victorian Goldfields in southern Australia.

Although there are no records of previous hardrock mining at Koonenberry, much of the gold recovered by surface prospectors occurs as coarse specimens with attached “reef” quartz, suggesting derivation from nearby bedrock sources. Reconnaissance mapping and sampling by EMX prior to 2014 demonstrated the presence of both eluvial/alluvial and bedrock sources of gold.

KNB has now conducted thorough assessments of the alluvial gold potential on the project, including the collection of hundreds of trench and bulk samples from surficial materials. In 2020, KNB switched its focus to further assessment and refinement of the bedrock gold targets. Work in 2020 and early 2021 concentrated on surface sampling, bulk samples of mineralized “reef” materials, and preparations for drilling in 2021. Numerous new gold targets were identified during these recent programs, which has greatly expanded the scope and scale of known gold mineralization on the project.

KNB is currently evaluating options to obtain a public listing and to secure further project financing.

The Queensland Gold property has been the site of historical mining and exploration activities for over a century. The project last saw intensive exploration in the mid-1990’s, when CRA Exploration and North Ltd (both precursor companies to what is now Rio Tinto Exploration Pty Limited) drilled the Boggy Creek prospect, intersecting long intervals (i.e., >25 meters) of near surface gold mineralization associated with quartz vein stockworks in rhyolitic-dacitic intrusions, which is typical of IRGS systems (see EMX news release dated August 27, 2019). Multiple historical gold mines are located elsewhere on the project, including the Monal Goldfields, which saw production from 1892 through the 1930’s.

EMX optioned the Queensland Gold property in September of 2020 to Many Peaks Gold Pty Ltd (“MPL”), a private Australian company, in exchange for cash, work commitments, advance royalty payments, a 2.5% NSR royalty and other considerations (see EMX news release dated September 8, 2020). MPL has been conducting surface sampling programs and is preparing for a reconnaissance drill program scheduled to commence this month (April). In addition to the IRGS styles of gold mineralization, EMX and MPL are now recognizing sediment-hosted copper mineralization at several locations on the property.

MPL has recently completed soil sampling programs at the Rawlins and Eastern Star prospects and is preparing for an initial phase of drilling in that area. MPL is also exploring options for a public listing and to acquire additional project financing.

Comments on Exploration Results and Sampling, and Nearby Mines and Deposits. EMX, KNB and MPL’s reconnaissance geological work and geochemical sampling were conducted in accordance with industry best practice standards. MPL’s reconnaissance samples were submitted to ALS laboratories in Brisbane, Australia (ALS Brisbane and Townsville are a NATA Accredited Testing Laboratory) for sample preparation and analysis. Gold was analyzed by 50g fire assay with AA finish and completed in the ALS Townsville laboratory, multi-element analysis was determined by four acid digestion and ICP-MS in the ALS Brisbane laboratory. Over-limit analyses on gold was completed by 50g fire assay with gravimetric finish. Over-limit copper and silver were assayed by ore-grade four acid digest and ICP-AES.

The nearby mines and deposits discussed in this news release provide context for EMX’s properties, which occur in a similar geologic setting, but this is not necessarily indicative that the properties host similar mineralization.

About EMX. EMX is a precious, base and battery metals royalty company. EMX’s investors are provided with discovery, development, and commodity price optionality, while limiting exposure to risks inherent to operating companies. The Company’s common shares are listed on the NYSE American Exchange and the TSX Venture Exchange under the symbol EMX. Please see www.EMXroyalty.com for more information.

This news release may contain “forward looking statements” that reflect the Company’s current expectations and projections about its future results. These forward-looking statements may include statements regarding perceived merit of properties, exploration results and budgets, mineral reserves and resource estimates, work programs, capital expenditures, timelines, strategic plans, market prices for precious and base metal, or other statements that are not statements of fact. When used in this news release, words such as “estimate,” “intend,” “expect,” “anticipate,” “will”, “believe”, “potential”  and similar expressions are intended to identify forward-looking statements, which, by their very nature, are not guarantees of the Company’s future operational or financial performance, and are subject to risks and uncertainties and other factors that could cause the Company’s actual results, performance, prospects or opportunities to differ materially from those expressed in, or implied by, these forward-looking statements. These risks, uncertainties and factors may include, but are not limited to: unavailability of financing, failure to identify commercially viable mineral reserves, fluctuations in the market valuation for commodities, difficulties in obtaining required approvals for the development of a mineral project, increased regulatory compliance costs, expectations of project funding by joint venture partners and other factors.

Readers are cautioned not to place undue reliance on these forward-looking statements, which speak only as of the date of this news release or as of the date otherwise specifically indicated herein.  Due to risks and uncertainties, including the risks and uncertainties identified in this news release, and other risk factors and forward-looking statements listed in the Company’s MD&A for the year ended December 31, 2020 (the “MD&A”), and the most recently filed Annual Information Form (the “AIF”) for the year ended December 31, 2020, actual events may differ materially from current expectations.  More information about the Company, including the MD&A, the AIF and financial statements of the Company, is available on SEDAR at www.sedar.com and on the SEC’s EDGAR website at www.sec.gov. 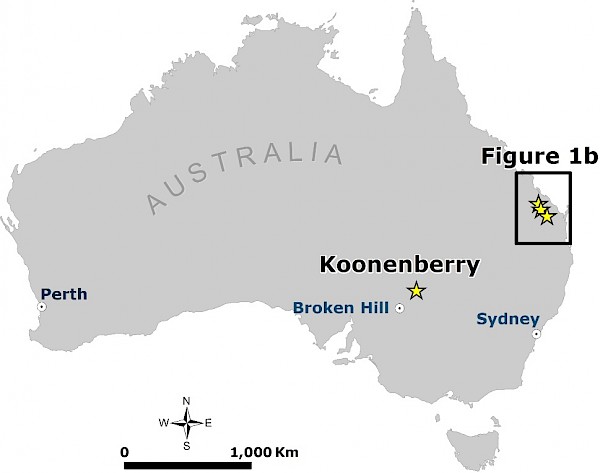 Figure 1b. Location of EMX projects in the Queensland province of Australia. 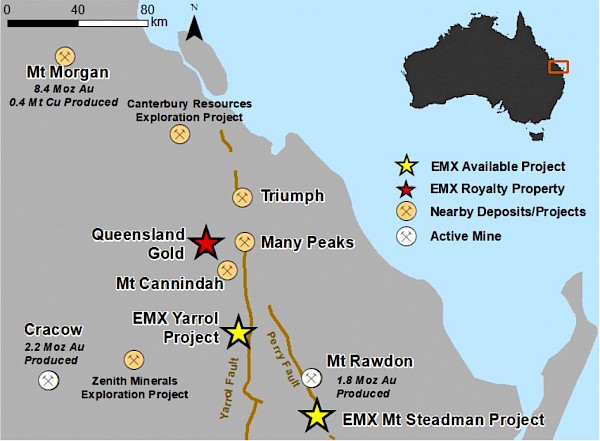 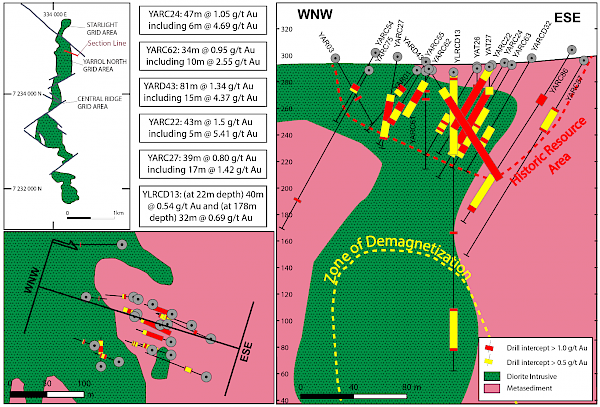 The historic drill data were acquired from the Geological Survey of Queensland. The  drill results for Yarrol were reported by MGT Mining Ltd (ASX:MGT) in 2010; https://www.nsx.com.au/ftp/news/021723444.PDF. EMX has not performed sufficient work to verify the historic drill results, but considers the information to be relevant and reliable. True widths are unknown.

Figure 3. Map of mine workings and geological features of the Mt Steadman project, Queensland, Australia.

Figure 3b: Inset map from Figure 3 showing the Chowey Goldfield. 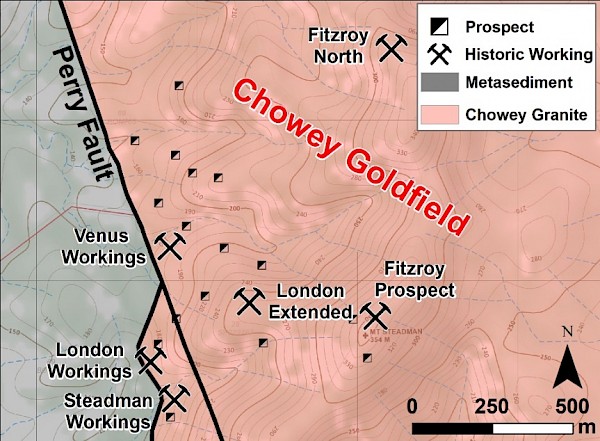 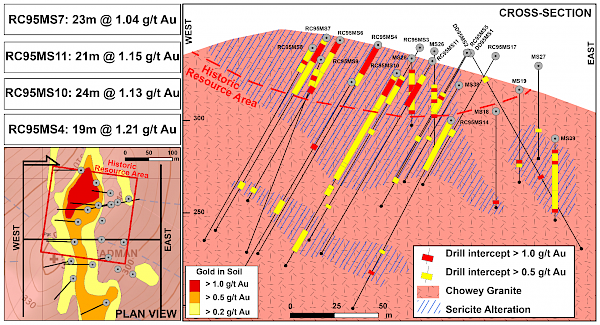 The historical drilling was completed by Probe Resources in 1995 and 1996 and reported to, and archived by, the Queensland Geologic Survey. EMX has not performed sufficient work to verify the historic drill results, but considers the published drill information to be relevant and reliable. True widths are unknown. 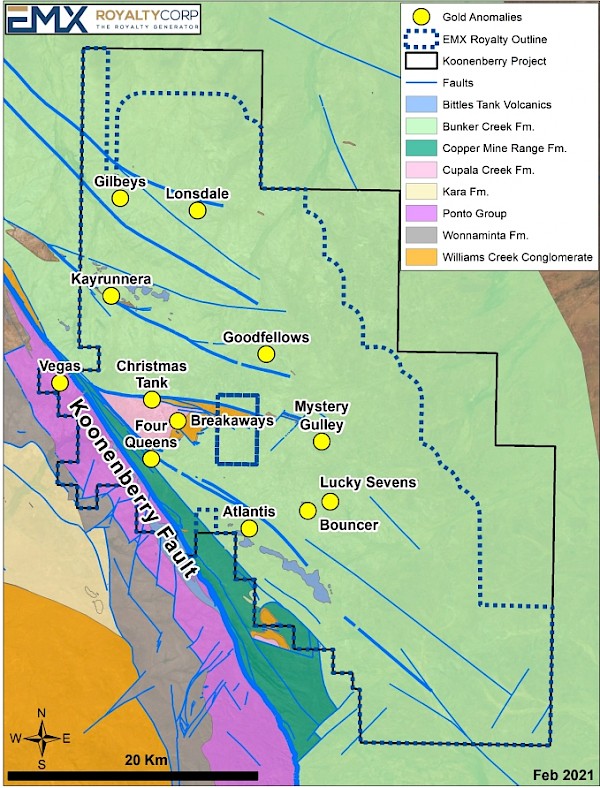 Figure 6. Locations of significant prospects and historic mine workings on Queensland Gold project. 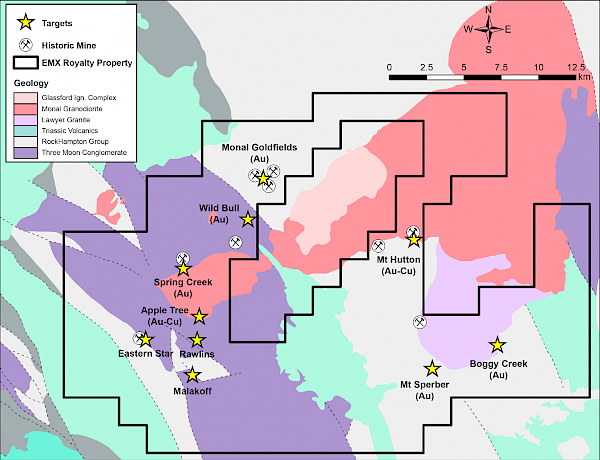 1 Independent Geological Report for MGT Mining Ltd, 2010. https://www.nsx.com.au/ftp/news/021723444.PDF. EMX has not performed sufficient work to verify the historical sample results and production figures, however, from EMX’s field reviews of the Yarrol property, these data are considered to be reliable and relevant.

5 The historical drilling was completed by Probe Resources in 1995 and 1996 and reported to, and archived by, the Queensland Geologic Survey (see MGT 2010 report). EMX believes these results are reliable and relevant.