Vancouver, British Columbia, July 20, 2022 (NYSE American: EMX; TSX Venture: EMX; Frankfurt: 6E9) – EMX Royalty Corporation (the “Company” or “EMX”) is pleased to announce the execution of an exploration and option agreement for two projects in Norway with Minco Silver Corporation (“Minco”)(TSX: MSV). The agreement provides EMX with cash payments and work commitments during a one-year option period, and upon exercise of an option on either project, EMX will receive equity stakes in Minco, additional work commitments, advance royalty payments, milestone payments and a 2.5% NSR royalty.

The two projects optioned to Minco are the Sagvoll and Sulitjelma polymetallic projects in Norway (See Figure 1). The Sagvoll project hosts both volcanogenic massive sulfide (“VMS”) styles of mineralization and magmatic sulfide nickel-copper mineralization, and the Sulitjelma project is past producer of VMS polymetallic mineralization. The combination of base, battery and precious metals make this an especially compelling portfolio of projects.

Minco is a well-capitalized, Canadian publicly traded company that will work closely with EMX to advance the projects through the option period.

Commercial Terms Overview. All terms in Canadian Dollars. Pursuant to the agreement, Minco can acquire a 100% interest in either of the projects by a) making a $60,000 cash payment to EMX upon execution, and b) spending a minimum of $100,000 on each of the projects during a 12 month option period. Upon exercise of an option on either project, Minco will:

EMX will also receive milestone payments of $250,000 on each retained project upon completion of a preliminary economic assessment (or “PEA”) and upon completion of a positive feasibility study (“PFS”). These milestone payments can be made in cash or in shares of Minco. Minco can also purchase 0.5% of any NSR royalty for $1 million by the sixth anniversary of the agreements.

Overviews of the projects. The Sagvoll and Sulitjelma polymetallic projects in Norway are located in the early Paleozoic VMS belt in Norway, which saw numerous districts and mines in operation from the 1600’s through the 1990’s.

Sagvoll Project, Caledonian VMS Belt, Southern Norway: The Sagvoll project in southern Norway consists of both VMS and magmatic nickel-copper sulfide mineralization developed along the Caledonian orogenic trend. This metallogenic region represents a tectonically displaced continuation of the Cambrian-Ordovician VMS belts in northeastern North America, which includes the Buchans and Bathurst VMS camps in eastern Canada, and also the Avoca VMS district in Ireland. As such, this represents one of the more prolific VMS belts in the world in terms of total production from its various mining districts, albeit now tectonically displaced and occurring along opposite sides of the Atlantic Ocean.

At Sagvoll, mineralization and historic mining areas are positioned along a 13 kilometer trend. Although multiple historic mines are present in the area, only limited historical drilling has taken place, most of which were drilled over 100 years ago. Many prospects and mining areas remain untested. The most recent work conducted in the district took place in 2006, when Xstrata PLC (“Xstrata”) flew airborne geophysical surveys and identified five prioritized nickel-copper targets and 11 VMS targets for further exploration and drill testing3. However, the follow-up exploration work was never completed.

EMX has identified several “walk-up” style drill targets based upon the historical and more recent Xstrata data, and will work closely with Minco to systematically explore the area.

Sulitjelma District, Central Norway: The Sulitjelma VMS district was discovered in 1858 and was mined continuously from 1891-1991. Sulitjelma was one of the last operating base metal mines in Norway. VMS style mineralization occurs along a trend that extends for over 20 kilometers and is developed along multiple stratigraphic horizons and structurally repeated sections. Metamorphism and deformation have caused thickening and repetition of mineralized horizons in the area. The district produced over 25 million tonnes, averaging 1.84% copper, 0.86% zinc, 10 grams per tonne silver and 0.25 grams per tonne gold4. Significant historical resources were left unmined at the time of closure in the early 1990’s.

The district has seen very little work since the mines closed. Recent (2014) airborne geophysical surveys highlighted multiple conductive anomalies along the main trend of mineralization that have not yet been drill tested, and EMX geologists have found outcropping expressions of VMS style mineralization, also along trend, that have not been developed or drill tested.

More information on the Projects can be found at www.EMXroyalty.com.

Nearby Mines and Deposits. The nearby mines and deposits discussed in this news release provide context for EMX’s projects, which occur in similar geologic settings, but this is not necessarily indicative that the Company’s projects host similar tonnages or grades of mineralization.

About EMX. EMX is a precious, base and battery metals royalty company. EMX’s investors are provided with discovery, development, and commodity price optionality, while limiting exposure to risks inherent to operating companies. The Company’s common shares are listed on the NYSE American Exchange and the TSX Venture Exchange under the symbol EMX, and also trade on the Frankfurt exchange under the symbol “6E9”. Please see www.EMXroyalty.com for more information.

1 By the sixth anniversary of the agreement, Minco can purchase 0.5% of EMX’s NSR royalty by paying EMX $1 million, thereby reducing the royalty to 2.0%.
2 If Minco retains all three projects, Minco will only be responsible for paying two of the advance royalty payments.
3 Internal Xstrata PLC internal report by Beaudoin for A/S Sulfidmalm Project 206, “Report of field work in the Skjarkerdalen area, central Norway: Summer 2006”. On file at Geological Survey of Norway (NGU).
4 Historical production data from the Geological Survey of Norway (NGU) Ore Database, Deposit Area 1841-024, updated Dec 18, 2017.

This news release may contain “forward looking statements” that reflect the Company’s current expectations and projections about its future results. These forward-looking statements may include statements regarding perceived merit of properties, exploration results and budgets, mineral reserve and resource estimates, work programs, capital expenditures, timelines, strategic plans, market prices for precious and base metal, or other statements that are not statements of fact. When used in this news release, words such as “estimate,” “intend,” “expect,” “anticipate,” “will”, “believe”, “potential” and similar expressions are intended to identify forward-looking statements, which, by their very nature, are not guarantees of the Company’s future operational or financial performance, and are subject to risks and uncertainties and other factors that could cause the Company’s actual results, performance, prospects or opportunities to differ materially from those expressed in, or implied by, these forward-looking statements. These risks, uncertainties and factors may include, but are not limited to: unavailability of financing, failure to identify commercially viable mineral reserves, fluctuations in the market valuation for commodities, difficulties in obtaining required approvals for the development of a mineral project, increased regulatory compliance costs, expectations of project funding by joint venture partners and other factors.

Readers are cautioned not to place undue reliance on these forward-looking statements, which speak only as of the date of this news release or as of the date otherwise specifically indicated herein. Due to risks and uncertainties, including the risks and uncertainties identified in this news release, and other risk factors and forward-looking statements listed in the Company’s MD&A for the quarter ended March 31, 2022 and the year ended December 31, 2021 (the “MD&A”), and the most recently filed Revised Annual Information Form (the “AIF”) for the year ended December 31, 2021, actual events may differ materially from current expectations. More information about the Company, including the MD&A, the AIF and financial statements of the Company, is available on SEDAR at www.sedar.com and on the SEC’s EDGAR website at www.sec.gov. 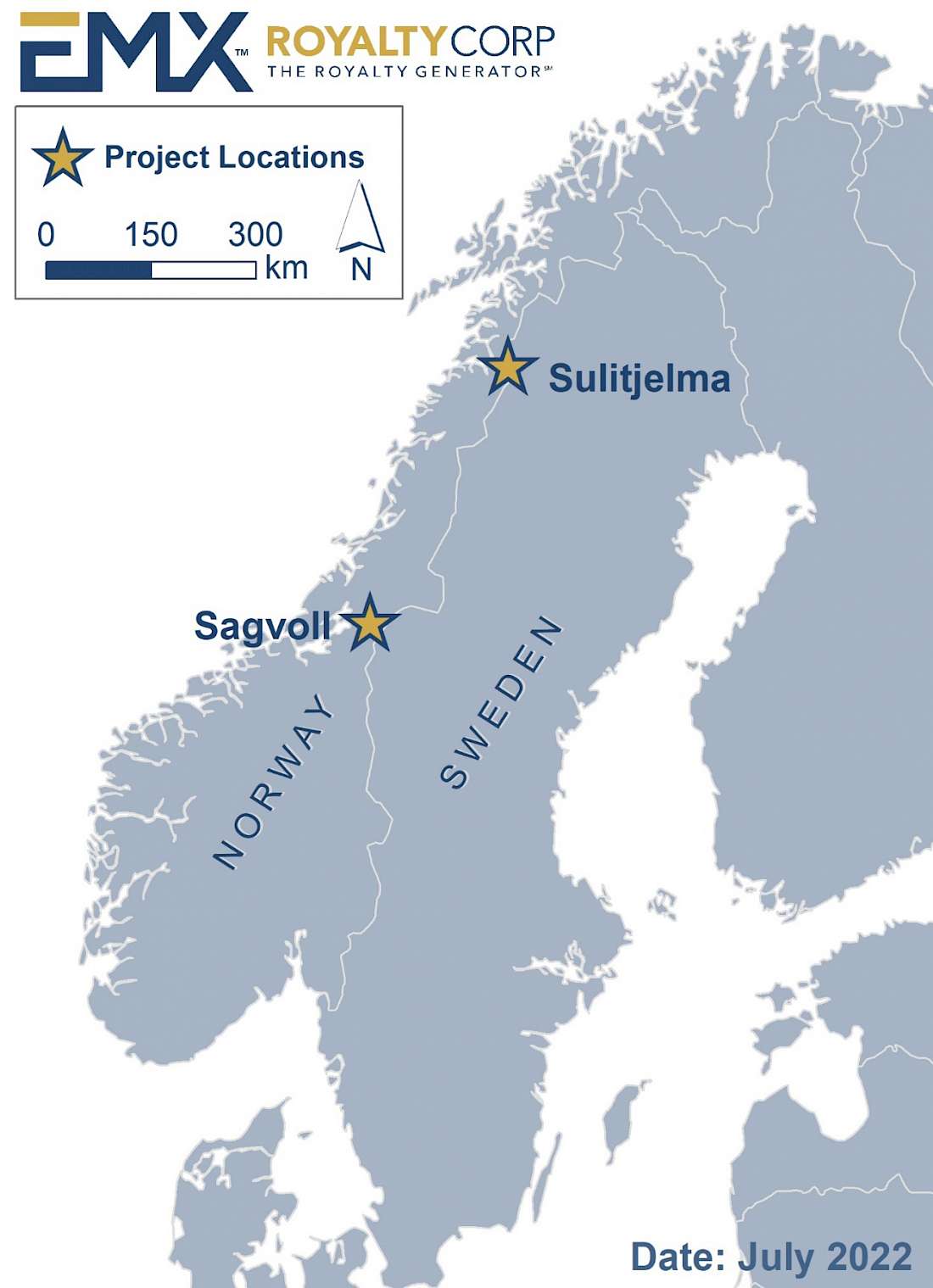