PNR recently acquired the Selebi and Selebi North nickel-copper-cobalt mines and signed an asset purchase agreement to acquire the Selkirk nickel-copper-cobalt-PGE mine, which are located in Botswana’s prolific Selebi-Phikwe and Tati nickel mining districts, respectively (see Figure 1). The combined Selebi-Phikwe and Tati districts were a leading producer of nickel and copper from initial production in 1972 through closure of the mines at a time of low nickel prices in 2016. PNR intends to modernize and revitalize the mines it recently acquired and further evaluate the exploration potential within the project areas.

In addition to the recent asset acquisitions, in February PNR signed a non-binding letter of intent with North American Nickel Inc. (TSX-V: NAN) (“NAN”) providing for a business combination of PNR and NAN which would be effected as a reverse takeover (“RTO”) (see NAN News Release dated February 17, 2022). The RTO will provide a public listing and near-term liquidity for PNR shareholders. NAN currently owns 8.9% of PNR, with a warrant to acquire an additional 15% of the equity in PNR (the “Warrant”). As a result of the RTO transaction, PNR shareholders will hold approximately 75% of the outstanding common shares of the resulting issuer, with NAN’s shareholders holding the remaining 25% and NAN’s Warrant would be extinguished. The RTO transaction is subject to shareholder and regulatory approvals1.

Selebi Phikwe District. The metamorphosed magmatic sulfide nickel-copper-cobalt deposits of the Selebi Phikwe District are located in the Limpopo Mobile Belt of northeastern Botswana. The deposits were discovered in the early 1960’s, with mining operations commencing in 1972 and continuing through 2016. Together with its concentrator and smelting facilities, the Selebi-Phikwe District became one of world’s premier nickel mining complexes in the 1970’s and 1980’s. Operational inefficiencies, issues with the smelting complex, and low nickel prices led to closure of the mines in 2016. The mines and mining complex were operated by BCL Limited (“BCL”) and were subject to a recent liquidation process.

Two of the principal mines in the district, Selebi and Selebi North, have been acquired by PNR (See NAN News Release dated February 10, 2022), both of which include substantial underground infrastructure (shafts, rail, power and water) and unmined historical resources. PNR is currently conducting exploration and engineering programs as part of a redevelopment plan that has been approved by the liquidators of BCL and the Botswana government.

1Investors are cautioned that there can be no definitive assurances that the RTO transaction will be approved and closed, or that the indicative terms specified by PNR and NAN will ultimately be adopted.

Tati Mining District. The Tati Mining District is located 75 kilometers north of Selebi-Phikwe, near Francistown. Several mines occur in the district, including the Phoenix open pit nickel-copper mine and the nearby underground Selkirk nickel-copper-PGE mine. High grade nickel-copper-PGE mineralization was mined at Selkirk between 1989 and 2002 and direct shipped to the BCL Smelter at Selebi-Phikwe. A former owner of the Selkirk Mine, Norilsk Nickel Ltd, advanced the project to the feasibility stage and was preparing Selkirk as an open pit mining operation when it sold the mine to BCL in 2014.

Similar to the BCL assets at Selebi-Phikwe, assets of the Tati Nickel Mining Company were included in the recent liquidation process, which included the Selkirk Mine. PNR recently signed an asset purchase agreement with the liquidator to acquire the Selkirk Mine (see NAN News Release dated February 14, 2022) and has been conducting metallurgical tests and resampling of historical drill core.

PNR Activities at Selebi and Selkirk. The acquisition of the Selebi, Selebi North and Selkirk Mines by PNR followed an extensive period of evaluation, due diligence and data compilation and negotiations for acquisition of the assets. Proposed work by PNR at Selebi and Selebi North includes exploration drilling of prioritized geophysical targets, metallurgical and engineering studies, and upgrading of underground infrastructure. Proposed work at Selkirk will include continued metallurgical studies, exploration programs to update historical resources, and environmental studies.

Importantly, PNR is planning to design its own processing plant infrastructure and tailings facilities at Selebi and Selkirk which will be spatially and operationally independent of the historical concentrator plants and smelting facilities at Phikwe. Upon commencement of production, PNR intends to produce both copper concentrate and nickel-cobalt concentrate products for sale.

As a strategic shareholder, EMX has maintained an active dialog with the management team at PNR and has made site visits to the project areas. EMX looks forward to continuing its active relationship with the resultant issuer following completion of the RTO.

In recent years EMX began seeking strategic investment and royalty generation opportunities in nickel and associated battery metal elements such as cobalt and PGE’s. EMX’s investment into PNR is another example of this approach and provides EMX with additional commodity diversification and exposure to the battery metals market.

About EMX. EMX is a precious, base and battery metals royalty company. EMX’s investors are provided with discovery, development, and commodity price optionality, while limiting exposure to risks inherent to operating companies. The Company’s common shares are listed on the NYSE American Exchange and the TSX Venture Exchange under the symbol EMX, and also trade on the Frankfurt exchange under the symbol “6E9”. Please see www.EMXroyalty.com for more information.

This news release may contain “forward looking statements” that reflect the Company’s current expectations and projections about its future results. These forward-looking statements may include statements regarding perceived merit of properties, exploration results and budgets, mineral reserve and resource estimates, work programs, capital expenditures, timelines, strategic plans, market prices for precious and base metal, or other statements that are not statements of fact. When used in this news release, words such as “estimate,” “intend,” “expect,” “anticipate,” “will”, “believe”, “potential” and similar expressions are intended to identify forward-looking statements, which, by their very nature, are not guarantees of the Company’s future operational or financial performance, and are subject to risks and uncertainties and other factors that could cause the Company’s actual results, performance, prospects or opportunities to differ materially from those expressed in, or implied by, these forward-looking statements. These risks, uncertainties and factors may include, but are not limited to: unavailability of financing, failure to identify commercially viable mineral reserves, fluctuations in the market valuation for commodities, difficulties in obtaining required approvals for the development of a mineral project, increased regulatory compliance costs, expectations of project funding by joint venture partners and other factors.

Readers are cautioned not to place undue reliance on these forward-looking statements, which speak only as of the date of this news release or as of the date otherwise specifically indicated herein. Due to risks and uncertainties, including the risks and uncertainties identified in this news release, and other risk factors and forward-looking statements listed in the Company’s MD&A for the year ended December 31, 2021 (the “MD&A”), and the most recently filed Revised Annual Information Form (the “AIF”) for the year ended December 31, 2021, actual events may differ materially from current expectations. More information about the Company, including the MD&A, the AIF and financial statements of the Company, is available on SEDAR at www.sedar.com and on the SEC’s EDGAR website at www.sec.gov.

Figure 1. Location map for the Selebi-Phikwe and Tati Mining Districts in Botswana. 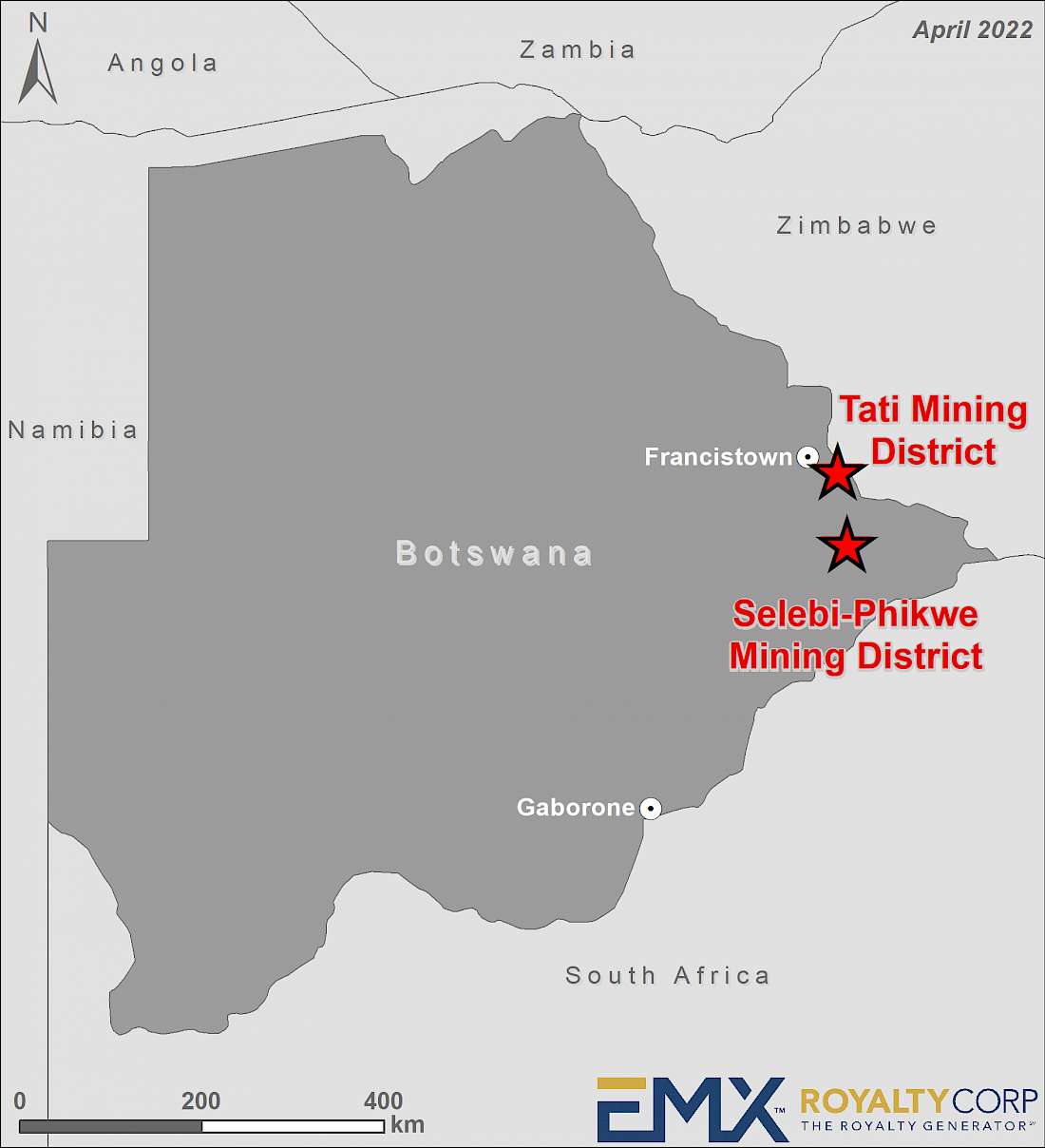